Elizabeth Satterfield Marketing and IT Manager 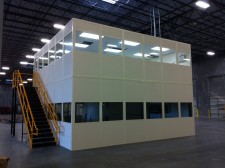 Blairsville, Ga., June 1, 2017 (Newswire.com) - With confidence in the economy and a sustained revenue flow, companies are more and more likely to invest for the future.  With $1,161 billion in construction spending in 2016, we saw an increase of roughly $50 billion from the year before. In 2017, the construction sector is projected to have a spending of $1,234.5 billion. This would be almost double the increase from the year before.

The rise in spending will be seen across all facets of our economy, with a projected $501 billion coming in the form of residential spending and $732 billion coming in the form of commercial, institutional, industrial, and civil construction. And, perhaps even better, the construction industry expects a steady, increasing growth past 2017 as well. Of course, this increase in demand is obviously great for our economy. It shows a confidence in our economic system and country as a whole. In essence, increased spending now will more than likely lead to increased spending in the future.

One theory is that there is a lack of schools to allow young adults to learn technical skills required for the construction industry.  However, many argue that young men and women themselves are moving toward alternative career paths to construction in comparison to the generation before.

However, the construction sector has found an alternative to solve this labor problem ...

Increasing Use of Modular Construction

Another issue seen with a reduced construction force occurs in rural areas.  The number of quality construction companies in a rural area can sometimes be very low, leaving not a lot of options for a person or company to turn to. But this turns out to be another one of the strengths of modular construction and actually one of the driving factors of its development.  As mentioned in our post, “How Modular Construction Works,” the modular construction process was first developed in the 19th century as a way to provide reliable housing to areas with inexperienced or no construction workers.

But today, this is no longer the case. The modular construction industry has completely evolved from its early day. Everything is still constructed off-site, but now all buildings and structures can be completely designed to fit project and needs. As companies realize the time, money, and struggle that can be saved through the use of modular construction, they will undeniably begin integrating the process into their future building projects, even focusing the developments solely around modular construction.

Traditional construction faces many issues when it comes to the handling, creation, and recycling of wasted materials. In fact, an NAHB study found that an estimated 8,000 pounds of waste are created from the construction of a 2,000-square-foot building. These squandered materials are all standard materials used to construct a building: wood, brick, insulation, drywall, etc. However, only an estimated 20% of these leftover construction materials are actually re-purposed or recycled, according to The American Institute of Architects. On top of that, the AIA states that “it is estimated that anywhere from 25 to 40 percent of the national solid waste stream is building-related waste.”[1] And in 2009 the Construction Materials Recycling Association, estimated that construction and demolition waste from building construction was around 325 million tons annually.

Overall, the integration of the Internet of Things will be an asset to help solve construction’s waste problem, as well. These items offer instantaneous inventory at all times on the site, helping materials to be used to their fullest ability.

Similarly, modular construction’s factory-like setting allows for a more orderly work process and standardized materials. Leftover materials are not as much as a problem because they can easily be used on the next project coming down the line. Replacing certain traditionally built buildings with these modular counterparts will help reduce one of construction’s most glaring problems.

Get notified about new releases.